When it’s your turn to pick for book club, it can sometimes be a difficult choice. You want a good read and one that will get everyone talking about the book (whether they love it or hate it!) So we have rounded up 11 brilliant book club picks guaranteed to generated discussion!

#1. The Light Between Oceans by M.L. Stedman After four harrowing years on the Western Front, Tom Sherbourne returns to Australia and takes a job as the lighthouse keeper on Janus Rock, nearly half a day’s journey from the coast with his young wife Isabel. Years later, after two miscarriages and one stillbirth, the grieving Isabel hears a baby’s cries on the wind. A boat has washed up onshore carrying a dead man and a living baby. Tom wants to report the man and infant immediately but Isabel insists the baby is a gift from God, and against Tom’s judgment, they claim her as their own and name her Lucy.

This book may break your heart but you will enjoy the journey along the way. It is a beautifully written book, so easy to read. It leaves you slightly conflicted as to who you are rooting for in the end, the wrong side or the right. You do get attached to the little life that Tom & Isabel have made for themselves on the isolated Janus Rock and you can’t help but feel it is right. Worth a read, long may M. L. Stedman keep writing!

#2. Asking For It by Louise O’Neill In a small town where everyone knows everyone, Emma O’Donovan is different. She is the special one – beautiful, popular, powerful. And she works hard to keep it that way. Until that night …Now, she’s an embarrassment. Now, she’s just a slut. Now, she is nothing. And those pictures – those pictures that everyone has seen – mean she can never forget.

This award-winning (Book of the Year at the 2015 Irish Book Awards), bestselling novel about the life-shattering impact of sexual assault, rape and how victims are treated, will definitely get the discussion going. It makes you really examine the role of everyone involved – the victim, their friends, their family, the society that makes us think of rape in this way. It’s very thought provoking.

#3. All the Light We Cannot See by Anthony Doerr A beautiful, ambitious award winning (2015 Pulitzer Prize for fiction as well as The Carnegie Medal) novel about a blind French girl and a German boy whose paths collide in occupied France as both try to survive the devastation of World War II. Marie-Laure’s father works at the Museum of Natural History in Paris but as the Nazis approach to take over Paris, he escapes with his daughter and a valuable diamond…

This is really a magnificent and deeply moving novel, a real page-turner, as you want to find out how the 2 main characters, Marie-Laure and Werner, get on during their respective lives during the war. The writing is so beautiful but it isn’t a difficult read, and the themes are universal – love, family, war, survival, loyalty and friendship.

Recommended Reading: 22 of the hottest summer reads for parents This book is set in the Basque town of Guernica around the time of the Spanish Civil War. Miguel has fled to Guernica in search of a new life and Miren is the centre of the new life that he finds there.

You cannot help but be drawn in by the amazing way in which this book has been written. In my opinion, Dave Boling has a gift. He writes and he makes you feel; hurt, sorrow, joy, love – the full gambit of emotions! I dare anyone not to be moved by this story, yes at it’s heart it is a love story, a beautifully written one, but it’s a story also rich in history and war.

#5. The Dressmaker by Rosalie Ham This story centres around the mysterious Tilly Dunnage and her mother. Tilly left when she was younger under a cloud but returns to look after her sick mother. Rosalie Ham has written a humourous description of life in a small town, and how those who get out and come back fare.

This is a fun read and was a favourite with my book club. You are wondering from the start what she could have done to warrant such discussion amongst the townspeople, and the story eventually unfolds. The characters are written wonderfully and some just jump off the page – for me Sargeant Farrat is a hoot and I looked forward to his next appearance while I was reading the book. It’s a great read, with a few giggles thrown in. There are serious parts to it also but so worth the read.

#6. The Boys in the Boat by Daniel James Brown If your bookclub has never dipped into non-fiction then we recommend this #1 “New York Times” bestselling story about American Olympic triumph in Nazi Germany, the true story of how nine working-class boys from the American West showed the world at the 1936 Olympics in Berlin what true grit really meant.

The heart of the story is about Joe Rantz, a teenager whose family rejected him as his step-mother didn’t want him around. So he ends up without family or prospects, but finds himself loving rowing and it becomes a way of finding a place for himself in the world.

Even though you know the ending, the writing in this book will have you gripped as you keep reading, particularly when all the odds are against the team, from the elite East Coast universities to the Nazis who do everything to stop them succeeding.

#7. The Green Road by Anne Enright Shortlisted for the 2015 Costa Novel Award and longlisted for the 2015 Man Booker Prize, The Green Road is a story of fracture and family, selfishness and compassion – a book about the gaps in the human heart and how we learn to fill them. The children of Rosaleen Madigan leave the west of Ireland for lives they never could have imagined in Dublin, New York and various third-world towns. In her early old age their difficult, wonderful mother announces that she’s decided to sell the house and divide the proceeds. Her adult children come back for a last Christmas, with the feeling that their childhoods are being erased, their personal history bought and sold.

This novel makes you think all about the complications of being part of a family – the misunderstandings that we carry to adulthood, the grudges, the good memories, the bad memories. It’s also about what the idea of home and family means to different family members. Beautifully written but not everyone liked all the characters in the book, so it definitely generated some discussion in our book club.

#8. The Watchmaker of Filigree Street by Natasha Pulley In 1883, Thaniel Steepleton returns to his tiny flat to find a gold pocketwatch on his pillow. But he has worse fears than generous burglars; he is a telegraphist at the Home Office, which has just received a threat for what could be the largest-scale Fenian bombing in history. When the watch saves Thaniel’s life in a blast that destroys Scotland Yard, he goes in search of its maker, Keita Mori – a kind, lonely immigrant who sweeps him into a new world of clockwork and music. Although Mori seems harmless at first, a chain of unexpected slips soon proves that he must be hiding something.

When this book arrived in the post, I got very excited. I am an avid book fan and this is one BEAUTIFUL book – you just want to touch the cover! I sincerely hoped that the contents inside were as good as the fabulous cover. It didn’t disappoint. We meet the three central characters and read with interest until their lives intertwine in the most peculiar ways! It is a novel that has mixed fact, fiction and incredible flights of imagination with success. You cannot predict where this book is heading at any point, which I loved, and it kept me entertained right to the very end.

#9. The 100 Year Old Man who Jumped Out of The Window and Ran Away by Jonas Jonasson

After a long and eventful life, Allan Karlsson ends up in a nursing home, believing it to be his last stop. The only problem is that he’s still in good health, and in one day, he turns 100. A big celebration is in the works, but Allan really isn’t interested so he decides to escape. He climbs out the window in his slippers and embarks on a hilarious and entirely unexpected journey, involving, among other surprises, a suitcase stuffed with cash, some unpleasant criminals, a friendly hot-dog stand operator, and an elephant (not to mention a death by elephant).

Quirky and utterly unique, this is a laugh out loud crazy journey with the most unlikely of travelling companions! Happily he has a few other books published, so the fun doesn’t have to end with this story.

#10. The Unlikely Pilgrimage of Harold Fry by Rachel Joyce 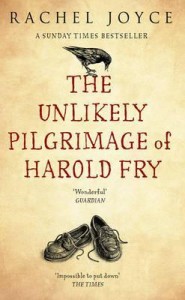 When Harold Fry nips out one morning to post a letter, leaving his wife hoovering upstairs, he has no idea that he is about to walk from one end of the country to the other. He has no hiking boots or map, let alone a compass, waterproof or mobile phone. All he knows is that he must keep walking. To save someone else’s life.

This is such a charming book. You will get completely caught up in Harold’s journey as the reasons for his pilgrimage become clearer and clearer. He meets some interesting characters along the way and I also found the chapters about his wife, who has been left behind not understanding what has happened, very poignant as her life is disrupted in an unexpected way. Ifemelu and Obinze are young and in love when they depart military-ruled Nigeria for the West. Beautiful, self-assured Ifemelu heads for America, where despite her academic success, she is forced to grapple with what it means to be black for the first time. Quiet, thoughtful Obinze had hoped to join her, but with post-9/11 America closed to him, he instead plunges into a dangerous, undocumented life in London. Fifteen years later, they reunite in a newly democratic Nigeria, and reignite their passion for each other and for their homeland.

I found this an unput-downable book. It’s a compelling, powerful yet tender story about race and identity. It makes you think about what it means to be an immigrant, especially an undocumented one in the case of Obinze who has to “borrow” a National Insurance number to be able to work a lowly job in London. The love story between the two main characters which spans several years could have come across cheesy or incomplete, but it is beautiful and feels realistic in the hands of such a good writer. Over to you now! Have you read any of these books yourself or in a book club? Any books that your book club has enjoyed lately? Tell us in the comments below!

Carols By Candlelight And Other Carol Concerts To Enjoy