Lough Key Forest & Activity Park stands on grounds of the Rockingham Estate. The site of Rockingham House, which burned down in 1957, along with the parklands, islands and the lake is a place filled with mystery and history, not all of it good! Read on, if you Dare to Discover the Horrible Histories at Lough Key!

The history of Lough Key or Lough Cé is recorded as far back as 1184. During this time the park was called Moylurg and was ruled by the McDermotts, the Kings of Moylurg. Their official residence was The Rock, now known as Castle Island. A second residence was built on the mainland and this became known as Rockingham House. The Moylurg Tower now stands on the site where the majestic home once stood, but is doesn’t stand alone! 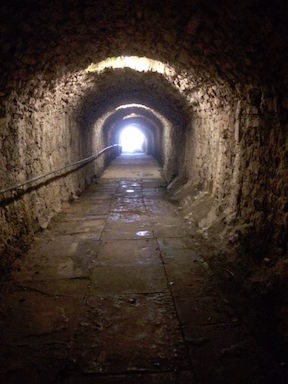 The old servant  tunnels appear as you stand at the foot of the soutterains. They were used during the time of the great Rockingham Estate to store food, as a place to run guns and as an escape route.

The real history of the old house became trapped here when the house burnt down in 1957. The fire pushed the beings, orbs and entities of the estate down below ground to hide out for eternity!

Every so often experts will come along to try to explain away the strange noises and sensations which you experience down in the old servant tunnels. But no one can deny when you step inside here, you’re not alone! The Moylurg Tower is usually the untold chapter. You see they say that everyone got out of that fire safely. That there was no life lost. But the youngest daughter of the Lord Lieutenant was there the night Rockingham House burnt down.

They did not realise she had strayed from her bedroom into the nursery and in the panic and confusion she was forgotten about. It wasn’t until the morning that they realised she was missing!

You may also enjoy – Boda Borg at Lough Key: A Family Adventure You Won’t Forget! The mystery of what happened to the Lieutenant’s daughter still remains. These days she is known as The Little Lady. Listen out for her song when you visit!

As the fire raged, it is believed that the Little Lady managed to find a safe spot away from the flames at the Ice House. She clambered in but then kept climbing further and further down, until she could see no more light….  It was believed she disappeared with the fire…

Today, if you listen carefully, you can sometimes hear her song… There is no entry to the island anymore.  We are told it is because it is unsafe but the real reason is that hundreds of years ago, the whole island was struck by lightning and all 100 people, mainly Chieftains, who lived on the island at the time were killed immediately.

But what happened to their souls and spirits? It is rumoured there was some arguing that same evening before the lightning struck……… so it is believed there was some unfinished business and when the light leaves the skies and the wind is blowing in the right direction, strange noises can be heard of swords clashing and faint cries…. The things that have happened in this tunnel. Once there was a group in the tunnels and there was a terrible sense of foreboding. Halfway around, at the tunnel dungeon entrance, a young woman cried out that her child had left her side, let go of her hand.

Lights were brought out to search for the girl. But the bulbs kept blowing. No amount of calling out her name brought her out.

Eventually as dawn broke and everyone began to squint at the surroundings, they saw the figure of a little girl behind the dungeon gate.

She was unharmed and smiling. When her mother asked her why she had gone in there – she simply said ‘The little girl led me in’. So, spirits live on……